Update: Wells Fargo has postponed the auction of the Reed’s home until February 26, 2013, but let’s keep the calls and emails coming to let them know that postponing isn’t enough: the Reed family needs a fair deal loan modification to remain in their home. 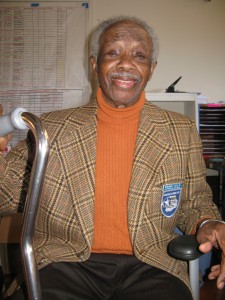 Please call/email Wells Fargo to stop the foreclosure auction of the home of Tuskegee Airman Benjamin Reed and his family on January 24, 2013:

Please take IMMEDIATE action to stop Wells Fargo’s January 24 foreclosure auction of 85-year-old disabled Tuskegee Airman Benjamin Reed and family at 2 Warren Drive in San Francisco. Please offer the family a fair deal loan modification to remain in their home and meet the demands listed for each of the 29 families who Wells Fargo has put at risk (see list sent by ACCE and Occupy Bernal).

As #1 in foreclosures in San Francisco, Wells Fargo is putting 32 families at risk of losing their homes due to foreclosure and related evictions. Wells Fargo is foreclosing on and evicting veterans and disabled and senior homeowners and families with children, as well as targeting homeowners with life-threatening illnesses. Wells Fargo has engaged in predatory, fraudulent, and racist lending practices and has contributed to a rash of foreclosure deaths.

Wells Fargo plans to foreclose on or evict the “Wells 29” despite:

This alert brought to you by Occupy Bernal, ACCE, and other supportive organizations coordinated within the Occupy the Auctions and Evictions campaign.

For updates and this action alert: http://occupytheauctions.org/wells 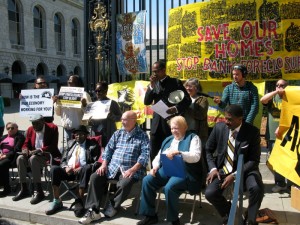 Elderly Foreclosure and Evictions Fighters from the San Francisco Bay Area held a press conference at 12:00 noon on Monday, September 17, at the San Francisco War Memorial Building at 401 Van Ness Avenue. MC Archbishop Franzo King, of the St. John Coltrane Church, kicked off the event by describing and analyzing his own foreclosure situation with Wells Fargo bank and the plight of seniors, veterans, and disabled folks preyed upon by the banks.

92-year-old disabled Navy veteran Robert Moses spoke about the multiple attempts he made to obtain a fair deal loan modification from loan servicer Homeward Residential (formerly American Home Mortgage) and from loan owner Deutsche Bank for his Visitacion Valley home where he has lived since 1972.

Don and Tina Baird spoke about their struggle to hold on to the home in Redwood City they purchased in 1966. Don served in the US Coast Guard in the Pacific, and will turn 90 this month. They face a foreclosure auction scheduled for September 24. He has heart surgery on September 27.

Benjamin Reed, Jr., spoke on his father’s behalf about a similar struggle with the bank. Benjamin Reed, Sr., was a Tuskegee Air Man. He and his wife Irma have lived Twin Peaks for 27 years.

Finally, senior Alfred Richardson talked about the bank’s auction of his home at the War Memorial Building last Tuesday.

After some rousing speeches from Archbishop King and Grace Martinez of ACCE, the press took individual interviews and much of the crowd marched over to the nearby JP Morgan Chase bank branch at 500 Van Ness Ave. 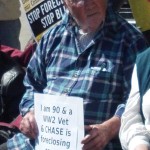 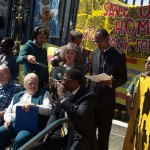 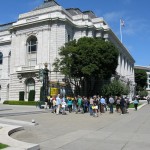 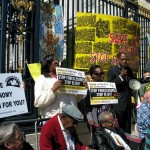 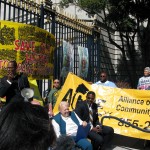 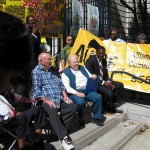 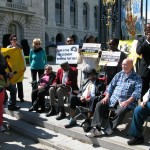 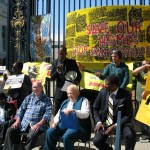 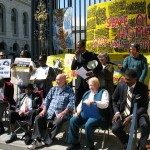 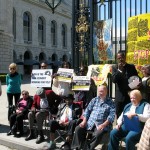 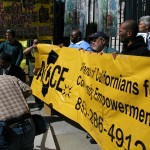 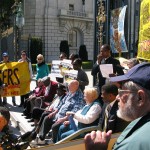