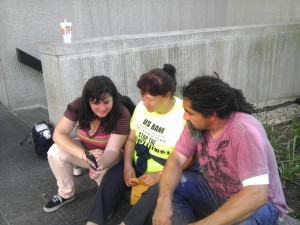 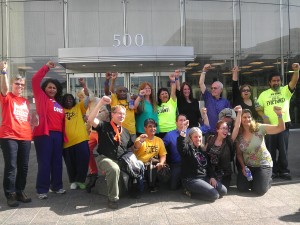 Hundreds of Foreclosure and Eviction Fighters and supporters from the Alliance of Californians for Community Empowerment (ACCE), the Home Defenders League, and other organizations occupied the U.S. Department of Justice building in Washington, D.C., on May 20, 2013, to demand justice by prosecuting the banks for their crimes. Some of the protestors were arrested.

Actions in support of the Washington, D.C., protest took place in San Francisco and elsewhere.

Between 400 and 500 protesters rallied at the Department of Justice (DOJ), closing Constitution Avenue and the three main entrances to DOJ. Folks demanded that Attorney General Eric Holder “Jail the Banksters” and “Not to Big to Jail”. Leaders of the CA ACCE-lad Home Defenders League and Occupy Our Homes struggled with police for access to DOJ. Members were tased (!!!), and seventeen were arrested, including our sister Rose Dennis of Oakland ACCE. A large contingent are occupying the main DOJ entrance tonight, and anticipate arrest tomorrow morning. Viv was quoted in the national Huffington Post report below. ALL of the press led with “Homeowners Occupy DOJ.” Here in SF, twenty SF ACCE members occupied the N CA office of DOJ, and after a confrontation, forced the Attorney in Charge to FAX our demand letter to Attorney General Eric Holder. Highlights of the local TV coverage included an interview with Vivian Richardson in DC; a 2011 tape from back when she had long hair; and a classic Ross Rhodes preach/speech. 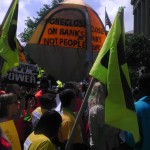 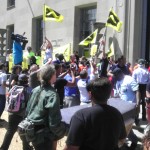 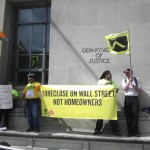 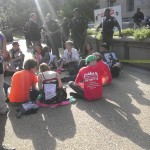 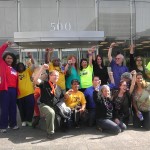 And check this out: Jail the Bankers Light Show

Despite lobbying efforts by ACCE and others, it looks like the California State Homeowner Bill of Rights legislation proposed by State Attorney General Kamala Harris is stalled in a California State Assembly committee.

Attorney General Kamala D. Harris has announced the California Homeowner Bill of Rights designed to protect homeowners from unfair practices by banks and mortgage companies and to help consumers and communities cope with the state’s urgent mortgage and foreclosure crisis.

– Basic standards of fairness in the mortgage process, including an end to dual-track foreclosures
– Transparency in the mortgage process, including a single point of contact for homeowners
– Community tools to prevent blight after banks foreclose upon homes
– Tenant protections after foreclosures
– Enhanced law enforcement to defend homeowner rights – paid for by fees imposed on banks
– A special grand jury to investigate financial and foreclosure crime

California Attorney General Kamala D. Harris has asked for a suspension of foreclosures on loans controlled by Fannie Mae and Freddie Mac. Harris has also called on Edward DeMarco, the head of the Federal Housing Finance Agency that regulates Fannie and Freddie, to step down.