Update: On May 15, 2013, Merrie Jo and Edzel Musni received a called from Wells Fargo’s HELOC department referencing Miguel Bustos, so there is at least one positive outcome of the meeting. 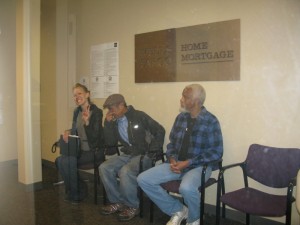 On May 14, 2013, five Foreclosure and Eviction Fighters and supporters from the Alliance of Californians for Community Empowerment (ACCE), Occupy Bernal, Occupy Noe, and the Occupy the Auctions and Evictions Campaign met with Wells Fargo executive Miguel Bustos regarding Wells Fargo’s predatory and discriminatory lending practices and how to resolve 18 default, foreclosure, and related eviction cases in the San Francisco Bay Area.

Wells Fargo executives who attended the April 10, 2013, meeting of the San Francisco Employee Retirement System (SFERS) Retirement Board and offered repeatedly to meet during the SFERS meeting, then snubbed all the email invitations sent to them after the SFERS meeting was over. So, ACCE and Occupy activists entered a Wells Fargo Home Mortgage Center at 2258 Market Street and demanded a meeting with one of the executives.

If Miguel Bustos was sincere in his commitment to make a real effort to settle the 18 cases brought to him, including the case of Bernetta Adolph who faces eviction on May 15, 2013, then the meeting was a successful one. 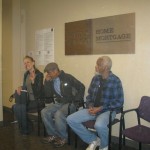 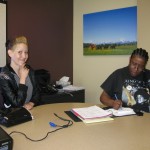 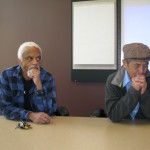 Despite lobbying efforts by ACCE and others, it looks like the California State Homeowner Bill of Rights legislation proposed by State Attorney General Kamala Harris is stalled in a California State Assembly committee.