On March 16, 2012, Dexter Cato and family re-occupied their home, backed up by about 70 Bayview neighbors, ACCE foreclosure fighters, Occupiers, and ILWU members.

Cato, an ACCE Foreclosure/Eviction Fighter and ILWU member, and his family were the victims of Wells Fargo dual tracking program. That’s when one part of the bank says they want to work with you while a separate department continues to foreclosure on your house.

In 2009, after Dexter and his wife, Christina, had applied for a modification, his wife tragically passed away in a traffic accident. Still grieving and now the only supporter of their four children, Dexter continued to try to work with the bank. They offered him a modification. He even sent in a payment for that modification. However, the bank, while claiming to work with him, foreclosed on him and his family and sold his home at public auction.

He didn’t find out until, last October, the Sheriff’s came to his door and posted a notice to vacate. 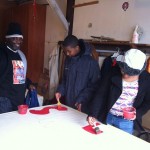 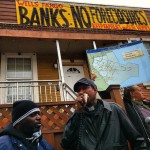 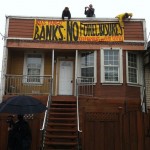 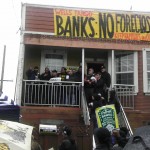 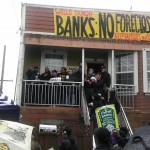 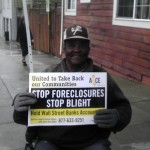