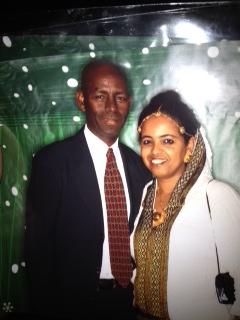 Jemal and Jamila Mohamed Getu have raised their two children in the home they bought eight years ago in San Francisco’s Bayview neighborhood. As a nursing assistant and bell man, they saved up money to put a substantial down payment to realize their dream of owning a home where their kids can play.

Their loan bounced through several bank bankruptcies while they spent a lot of their savings fixing up their home. When Jamila went on medical disability due to a work injury in 2008, the family could no longer make all of their mortgage payments, so they tried to refinance with loan servicer Citibank multiple times in 2009. However, Citibank refused a loan modification due to their credit score. Then, their home loan moved to Vericrest.

Like so many families, Jamila and Jemal were scammed by a “loan modification” company, who promised that they would get Jamila and Jemel a modification. An attorney accepted fees for two years without providing any help.

The Mohamed Getu’s have been to eviction court three times and have only a short time left in their home unless the bank agrees to stop the eviction, rescind the foreclosure sale, and offer them a fair deal loan modification.

Jamila and Jemal’s story is one of many similar stories where banks have refused to work with families, demanding payments for a loan that are now higher than the actual value of the house.

Vericrest CEO David Schneider — who was formerly the head of Washington Mutual, JP Morgan, and CITI mortgage, and who the FDIC charged with illegal banking practices — has the power to make it possible for Jamila and Jemal to stay in their home.

We are demanding that Vericrest and its CEO David Schneider do the right thing.

STOP the eviction of Jamila and Jemal Getu, RESCIND the foreclosure, and work with them for a fair loan modification with principal reduction as needed.