What: SFERS Retirement Board Meeting on Predatory Bank Investments
When: 1:00pm on Wednesday, April 10 (go immediately to sign in and stand in line at the door to get a seat — no protest in front of the building this time)
Where: 30 Van Ness Avenue, 3rd floor, near Market Street, San Francisco
RSVP: https://www.facebook.com/events/508497745864874
Petition: https://tinyurl.com/crt5kga

SFERS Commissioner Herb Meiberger introduced the motions at the April 10, 2013, SFERS Retirement Board meeting with overwhelming support from current and retired city employees served by the retirement system (read Commissioner Meiberger’s remarks about the meeting here). 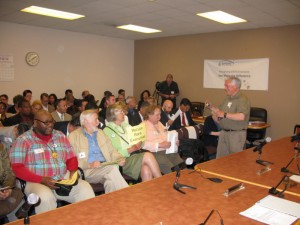 Current and retired city employees, Foreclosure and Eviction Fighters, and supporters from Service Employees International Union (SEIU) 1021, Alliance of Californians for Community Empowerment (ACCE), Occupy Bernal, Occupy Noe, and the Occupy the Auctions and Evictions Campaign provided important testimony about the illegal, predatory, and discriminatory practices of banks like Wells Fargo, JP Morgan Chase, and Bank of America at meeting of the San Francisco Employee Retirement System Retirement Board on January 9, February 13, March 13, and April 10, 2013.

At each meeting, the group asked the Retirement Board to uphold its fiduciary responsibility to investigate the illegal, predatory, and discriminatory practices of the banks, to request that the banks stop these practices, to sponsor shareholder resolutions if they don’t stop, and some asked the banks to divest from the banks’ stocks if the shareholder resolutions do not succeed. Some of the Commissioners responded favorably to the public comment testimony.

A number of organizations have declared their support of the motions including organizations representing most of the members of the SFERS retirement system:

Wells Fargo, JP Morgan Chase, and Bank of America are the market leaders in foreclosures and related evictions here in San Francisco and statewide. These banks engaged in illegal, predatory, and discriminatory practices by putting African-American and Latino borrowers into higher-cost, subprime loans than white borrowers. In fact, in July 2012, Wells Fargo agreed to pay what ended up as $234.3 million to settle a United States Department of Justice lawsuit for its discriminatory mortgage lending practices affecting more than 30,000 borrowers, including those banking at the Bayview Wells Fargo branch.

Wells Fargo is #1 in San Francisco foreclosures. San Francisco’s Mayor and Board of Supervisors have unanimously requested a halt to foreclosures and related evictions, especially since San Francisco Assessor-Recorder’s report showing that 84% of foreclosures have at least one legal violation and due to Wells’ $234.3 million settlement with the United States Department of Justice paid in response to allegations of racial discrimination in providing mortgage loans in San Francisco’s Bayview-Hunters Point and other neighborhoods.

Wells Fargo is putting 32 families at risk of losing their homes due to foreclosure and related evictions. Wells Fargo is foreclosing on and evicting veterans and disabled and senior homeowners and families with children, as well as targeting homeowners with life-threatening illnesses. Wells Fargo has engaged in predatory, fraudulent, and racist lending practices and has contributed to a rash of foreclosure deaths.